7 Pheras in a Wedding Ceremony: What Does It Mean?

\ Blog \ Uncategorized \ 7 Pheras in a Wedding Ceremony: What Does It Mean? 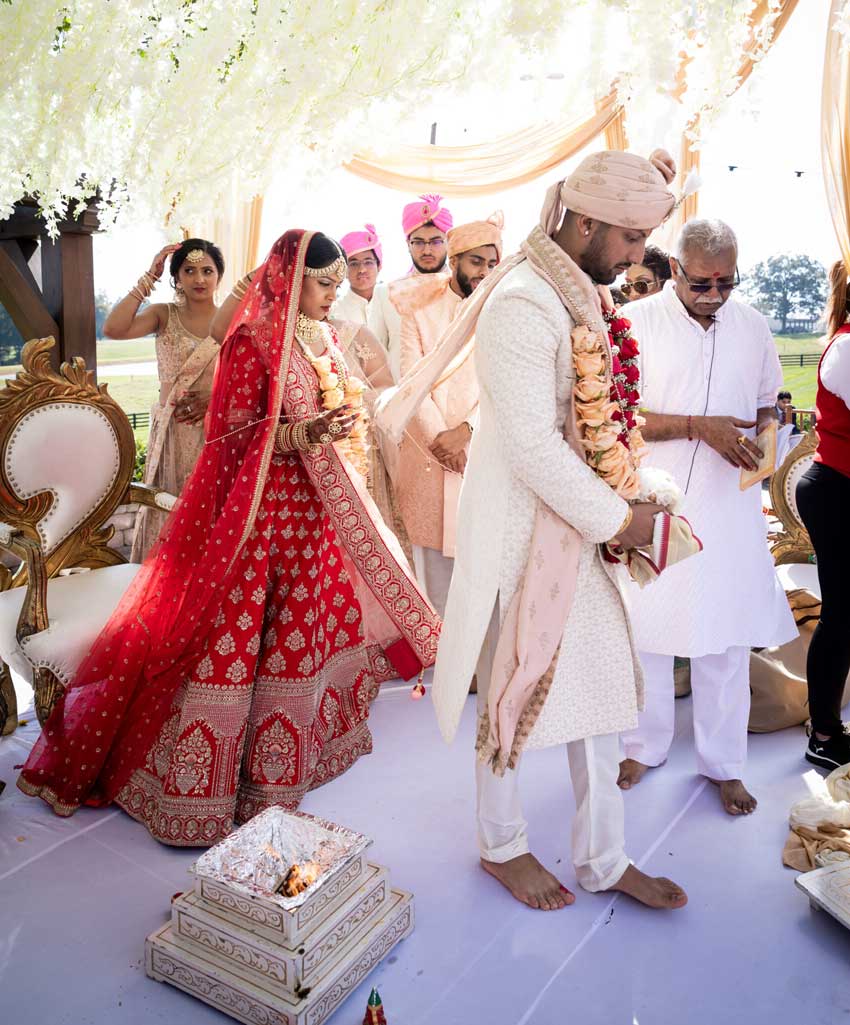 7 Pheras in a Wedding Ceremony: What Does It Mean?

The seven pheras, also known as sacred vows, performed at the Vedic Hindu wedding ceremony, are one of the most critical aspects of the wedding ceremony in India. When these vows are made, the couple prays to the gods for godly blessings. Alongside the prayers during the ceremony, the bride and groom make a severe promise to one another regarding loyalty, harmony with the family and marital accountability.

The groom leads the bride in front of the sacred fire around which they both bow. As he does this, he prays that their married life together will be just as nourishing for each other.

The groom and the bride now bow and pray for the strength to take care of each other, to be strong for one another. The second phera deals not just with praying to the gods for blessing the health of the family and happiness but also the couple’s vow to remain together even in the face of danger.

The third phera is that of prosperity. The groom asks the gods to bless their happiness and for this marriage to remain blessed with physical, emotional, and spiritual prosperity. In making these vows, the spouse reaffirms the vows of fidelity to her husband and herself by accepting the responsibility of her new role.

The fourth phera is when the husband asks to bless the family unit and acknowledges his new wife. In her turn, she vows to ensure that her husband is as happy the best she possibly can. This vow of reciprocal affection is intended to strengthen the bond of the family and strengthen the couple’s commitment to one another.

This means staying together as a family through thick and thin. In this phera, the bride and the groom are focused on their obligations to their children to come, and make vows to be excellent and loving parents, all the while as they seek the blessings of God for the future children. In the Hindu religion, the importance of these blessings is to ensure the wellbeing and happiness of children they will have.

The husband asks the Gods to protect them from evil and misfortune for their entire lives, right up until her last breath. In wishing his wife’s life is full of happiness and tranquillity, the bridegroom will also reaffirm his vow to ensure his wife’s happiness. As a response, the bride affirms her unwavering loyalty to her husband.

At the seventh and final phera, vows are made to remain forever together. There is a more profound significance to this final phera. It not only declares the love and devotion of the couple to one another in their marriage, but it also represents the final step in the binding of the couple together. They promise each other with these vows that they will remain together with wisdom, which is an absolute and explicit promise of love and devotion.

Wisdom isn’t just gained over a lifetime; it is gained over a long period of reincarnation as part of the Hindu religion. In the same way, the friendship and love that are created during the context of a Hindu marriage are intended to be passed on to their next lives as well.

With so many different cultures in the world today, it’s important to remember the rich traditions of India and what some refer to as “the most mystical culture in the world.” An accurate representation of Indian culture is evident through the sacredness of these vows, and by looking at each phera more closely, you can gain insight into the rich history of tradition in their marriage ceremonies. As India envisions its place amongst the modern world, it’s essential never to forget your wedding day’s significance for you and your family.